Steve Perisho, Theology and Philosophy Librarian, and curator of the Library’s Emmanuel Room, talks about a rare find in the Wesleyan, Wesleyan Holiness, and Free Methodist Collection and recounts the history surrounding this unique item. Lee Staman did the initial research into the Senkler family. 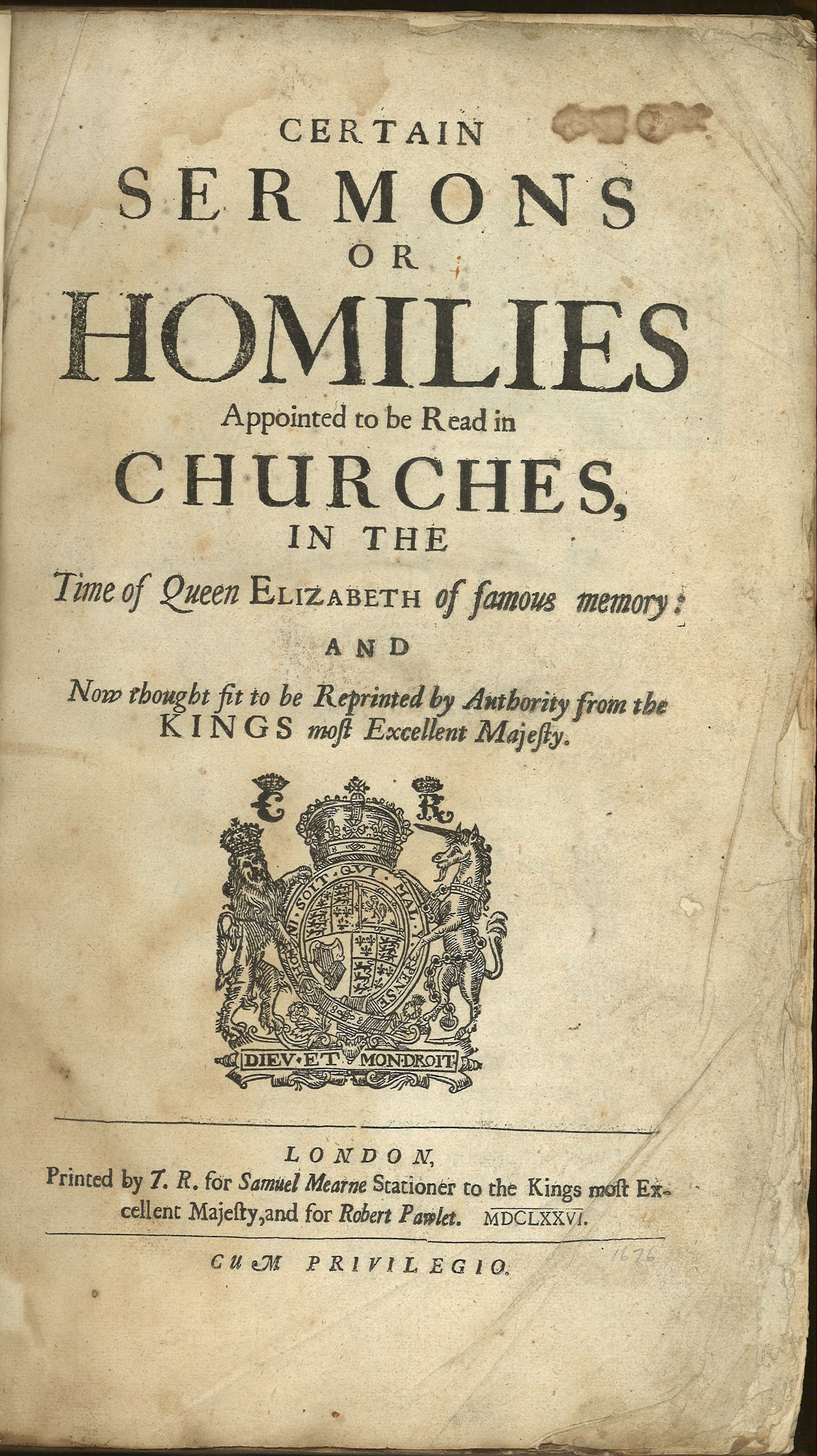 The First book of homilies, officially Certayne sermons, or homelies, appoynted by the kynges Maiestie to be declared and redde by all persones, Vicars, or Curates, euery Sondaye, in their churches, where they haue cure, was an answer of the Church of England to the question of how the newly reformed faith was to be stamped on the realm as a whole.

to draw sermons in englyssh vppon euery gospell in the yere and those to be printyed and sent vnto euery curate commandyng them to preach these same sermons euery sonday or ellse to reade them on the boke in the pulpit.[ref]Waduba, 559.[/ref]

But under the direction of Archbishop Thomas Cranmer, the more typically medieval focus on “the saints and their miracles” was replaced by a topical emphasis on Scripture as interpreted doctrinally by the reformers.[ref]Waduba, passim.[/ref]

It was under the less ambiguously “Protestant” King Edward VI that, on 31 July 1547,[ref]Certain sermons or homilies (1547) and A homily against disobedience and willful rebellion (1570):  a critical edition, ed. Ronald B. Bond  (Toronto:  University of Toronto Press, 1987), 4.[/ref] the First book of homilies appeared. Cranmer contributed a number of them, indeed all three of those later so treasured by Wesley.[ref]Bond, Certain sermons or homilies, 26.[/ref] The rest he assigned to others, including even (in the event) a staunch Romanist or two.[ref]“with only minor alterations, . . . the sermons on man’s misery and Christian love reappeared, signed with Harpesfield’s name and Bonner’s initials respectively, in the Marian [!] homily book of 1555.”  These, Bond suggests, “had been written earlier, perhaps in 1542, before either author knew fully the degree to which Cranmer would push doctrinal innovation” (Bond, Certain sermons or homilies, 27).  On the “wide discrepancy in attribution,” see Caroline Stacey, “Justification by faith in the two Books of homilies (1547 and 1571),” Anglican theological review 83, no. 2 (Spring 2001):  259.[/ref]

As the title page indicated, they were imposed (“appoynted by the kynges Maiestie to be declared and redde . . . euery Sondaye, in . . . churches”) with an eye to the re-formation of the realm along Protestant lines. Rare was the parson, vicar, or curate entrusted with a license to preach sermons of his own composition; most were required simply to read the homilies[ref]Waduba, 553.[/ref] persistently, week in and week out, as the Preface to the First book (referenced in the thirty-second Injunction of 31 July 1547[ref]Ronald B. Bond, “Cranmer and the controversy surrounding publication of Certayne sermons or homilies (1547),” Renaissance and Reformation/Renaissance et Reforme 12 (1976), 30.  A modernized edition of the Injunctions can be found in Documentary annals of the Reformed Church of England, ed. Edward Cardwell (Oxford:  Oxford University Press, 1839), vol. 1, pp. 4 ff.  Injunction 32 is to be found on p. 19.[/ref] and enforced by royal visitors[ref]E.g. Documentary annals, vol. 1, pp. 55 ff.[/ref]) made clear:

The whiche homelies, his Majestie commaundeth and straightely chargeth all persones, vicares, curates and all other havying spirituall cure, every Sondaye in the yere, . . . to reade and declare to their parishioners, playnly and distinctely, in suche ordre as they stande in the boke. . . . And when the foresayde boke of homelies is redde over, the Kynges Majesties pleasure is that thesame be repeted and redde agayn, . . . unto suche tyme as his Graces pleasure shall further be knowne. . . [ref]Bond, Certain sermons or homilies, 56.[/ref]

In this way they were rendered as familiar to the sixteenth- and seventeenth-century parishioner as the later (but now more famous) Book of common prayer.

The First book of homilies encountered stiff opposition from Stephen Gardiner, the Bishop of Winchester,[ref]See, e..g., Bond, “Cranmer and the controversy,” passim.[/ref] but carried the day and rose quickly to the level of a standard or formulary of Anglican doctrine.[ref]“after only three years” in the case of John Young, according to Bond (Bond, “Cranmer and the controversy,” 34).[/ref] A Second was dusted off and published under Queen Elizabeth I in 1571, along with a “Homily against disobedience and willful rebellion” directed against the recusant Northern Rising of 1569. Both were enshrined in the Thirty-Nine Articles of 1571 (1563), the two Books in Article 34/35, and the “Homily of justification” in Article 11; and both appear between the covers of the Restoration-era copy owned by Seattle Pacific University, the Second without its title page and table of sermons. Indeed, the pagination skips from 88[ref]At the bottom of which—the last page of the last First-book “Sermon against contention and brawling”—is, however, a kind of colophon beginning “Hereafter shall follow Sermons of fasting,” etc. This it would be a real stretch to call a proper table of contents.[/ref] to 93 at precisely that point.

The copy of the two Books of homilies in the Emmanuel Room antedates by seven years the Bridwell copy that some have supposed was owned by Wesley.[ref]Outler, in 1964, called it “His own copy” (John Wesley, ed. Outler, 66n4), but according to Maddox “there are no internal markings or collaborating evidence to confirm this claim” (Works 12, ed. Maddox, 29n9). For this reason, Maddox includes it among “volumes . . . purported to have belonged to Wesley, but for which the evidence is either weak or disputed”: “Inside the cover of this volume is inscribed: ‘Bought from Goodspeed. “A volume of sermons reported to have been in Wesley’s library.” G.T. Banks.’ But there is no autograph by Wesley or any other  internal evidence to confirm the claim in the inscription” (Maddox, “Remnants of John Wesley’s personal library,” Methodist history 42, no. 2 (2004):  127-128 (122-128), as reproduced at http://divinity.duke.edu/sites/default/files/documents/cswt/06_Remnants_of_Wesleys_Library.pdf).[/ref] Published in 1676 “by Authority from the KINGS most Excellent Majesty”, it hails from a period by which the two Books of homilies, though still formative of the clergy,[ref]According to MacLure, as quoted by Bond, it was then still “‘the greatest single influence’” on “the characteristic temper of Jacobean and Caroline divines” (Bond, Certain sermons or homilies, 12).[/ref] had long since begun to lose their dogmatic or at least pragmatic hold on the Church at large.[ref]Indeed, “It was [later none other than] John Wesley who gave the homilies, themselves almost extinct, forgotten, and misunderstood, a new lease on life” (Bond, Certain sermons or homilies, 15).[/ref] If the one title page is any indication, the First volume, at least, was printed in London by “T. R.” (possibly a son of the Thomas Ratcliffe mentioned in Plomer’s Dictionary[ref]and as—along with partner Edward Mottershed—an apprentice of William Stansby in Stationer’s Company apprentices 1605-1640; and as a master in his own right in Stationer’s Company apprentices 1641-1700.[/ref]) for the very famous publisher and bookbinder Samuel Mearne, and for Robert Pawlet, who, like the senior Ratcliffe (i.e. “T. R.”), may be the individual of that name fingered in both the Plomer Dictionary and Stationer’s Company apprentices. As for the two Books taken together, an expert might be able to say more on the book-historical significance certain variations in the typesetting. For example, it is all “God” part way through the Second book, but all “GOD” from Second-book homily no. 7 “concerning prayer” (among other notables of even greater potential interest).

Though we don’t know much about its subsequent history (we don’t even know for sure how or when we came by it), the re-binding effected by “Hunter, Rose & Co. Toronto”  between (probably) the years 1871 and 1895 may be an indication that it was owned by the Rev. Edmund John Senkler (1802-1872), an Anglican priest and natural philosopher who earned a Bachelor’s degree in 1824 and a Master’s degree in 1827 at Caius College, Cambridge; emigrated to Quebec in 1843; moved to Brockville (near Toronto) in 1847; and died there in 1872.[ref]Coincidentally, some of this detail can also be derived from the entry on a son, Judge William Stevens Senkler, in vol. 2 of a Cyclopædia of Canadian biography published by the “Rose Publishing Company” of Toronto in 1888.[/ref] This we conclude on the strength of the fact that it was rediscovered in the same Emmanuel Room closet containing other books inscribed “Edm. John Senkler” (or some variant on that) and re-bound in Toronto. Remnants of the Senkler library can also be found elsewhere, but primarily in the Thomas Fisher Rare Book Library at the University of Toronto.