Book review for The Cat’s Table, by Michael Ondaatje 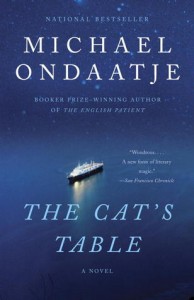 In need of a little light summer reading, I picked up the Michael Ondaatje’s latest novel The Cat’s Table from the Popular Fiction Collection on the basis of several glowing recommendations. Ondaatje weaves together a beautiful narrative that boarders on the poetic in its language and imagery.

The tone is autobiographical, and though it is fictional, the story does borrow from elements of the author’s life. It follows 11-year-old protagonist, Michael, as he makes his way from his native Sri Lanka across the Indian Ocean, through the Suez Canal, and through the Mediterranean Sea to make a new life with his family in England. During the three weeks he is aboard the Oronsay, Michael is seated at the Cat’s Table during meal times, a table full of outcasts at the fringes of society. It is the table furthest away from the prestigious captain’s table. It is also here that he befriends Cassius and Rhamadin, fellow Sri Lankan school boys, who he goes on to form life long memories with.

The mystery of a prisoner unfolds as the book goes on – a prisoner with a mysterious past, only seen after everyone, except for the curious boys, has gone to bed. He emerges with shackles around his hands and feet, with guards at his side, and is allowed a nightly walk on the deck. As the narrative jumps between Michael’s young self on the ship and his adult self, established and settled in Canada, we learn how this slowly unfolding mystery ties people together, and has a lasting impact on the lives of the people we learn to know.

Ondaatje’s writing is much like the ship he writes about – it moves slowly, sometimes feeling like it has stopped moving altogether, caught up in dream like imagery and winding thought processes; but then one comes to the end, and realizes one has crossed oceans. The story is intricately and masterfully crafted; creating a tangible world out of the liminal space that transition creates, between one land and another, between chapters of life, between childhood and adulthood. Despite the storms, the crashing waves, and the navigation through misty canals, in some ways, it is the story of any state of change.