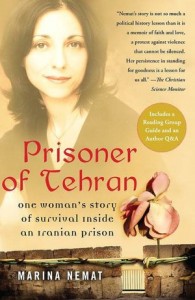 Prisoner of Tehran is the gripping autobiography of Marina Nemat, a young, Christian, Iranian woman who survives two years of imprisonment during the Islamic Revolution. A story as honest and accessible, as it is heartbreaking and significant. Marina was 16 years old when she becomes a political prisoner – is blindfolded and locked up behind the towering walls of Evin Prison. Before the revolution, life was simple. School, church, and friends mixed in with trips to the beach, falling in love, and befriending the book seller on the corner.

Then the Shah fell.

Under the new Ayatollah, books were banned, the hijab became mandatory, and school subjects became subordinate to the study of the Koran., Marina once asked her teacher to get back to teaching math. When the answer was “Leave if you don’t like it”, that is what she did. Followed by her entire class.

This bravery was also her downfall. In January 1982 she was arrested for “crimes against the government”. She was brutally tortured and sentenced to die. Saved by a prison guard who wanted to marry her, she lived – but as a prisoner of a different kind. She was forced into a union with Ali who reminded her that as a prisoner and as a woman she had no rights.

As disturbing and insightful as much of the narrative was, part of the power of the book lies in her portrayal of her relationship with Ali. We – like Marina – want to hate him. He threatened her, and took away any hope for freedom she clung onto. But the more his character unfolds, the more we realize that Ali had good in him, he had depth, a story, and a family who loved him. He loved Marina in his own way, and loved her well. His family welcomed her into their fold like her own family never did. He ensured her deliverance from Evin. We see a character grow to question whether violence is the answer, whether perhaps love and compassion do more good. The evils he committed are never acquitted or fully forgiven, but he himself cannot be written off as evil. Good and evil is not as black and white as we would like to think.

Marina’s story explores all aspects of  human rights, what they are, how they are violated, and why they are important and must be respected. She explores the element of torture as a means of breaking the human spirit. She delves into the strength and good of humanity, present even when it seems completely lost.

Marina eventually found freedom and escaped to Canada where she now lives with her childhood sweetheart, and now husband Andre.