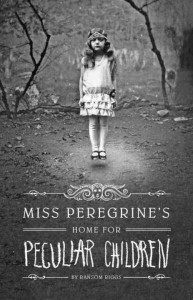 Growing up, Jacob Portman thought his Grandpa Portman was the most fascinating person he knew. He had fought in wars, crossed oceans and deserts, joined the circus, and spoke at least half a dozen languages. The stories Jacob loved the most were the stories about Grandpa’s life in a Welsh children’s home. Grandpa claimed it was an enchanted place, on an island where the sun always shined and nobody ever got sick or died. The island was designed to keep him and his friends safe from the monsters who were after them for their mysterious and magical abilities. Jacob never doubted his grandpa’s colorful stories, after all, he had spooky photographs and crumbling, hand-written letters to their truth.

As he grew older, Jacob began to doubt the existence of children who could fly, or turn invisible, or lift boulders. He believed the stories were a coping mechanism for Grandpa to deal the tragedies of World War II. He asked for stories less and less, until Grandpa no longer told them. However, after a tragic family event, his grandfather’s cryptic last words, and a mysterious letter from a Miss Peregrine, Jacob decides to search for his grandfather’s childhood home and the truth. His journey leads him to an island off the coast of Wales, where he discovers a crumbling orphanage. As he explores the decrepit island and dilapidated halls, discovering more haunting photographs and dusty letters, he learns the children who once resided there were much more than peculiar: they may have been unsafe, banished to the island for a reason, and they are, impossibly, still alive.

Written around found vintage photographs that are interspersed throughout the text along with handwritten letters, Miss Peregrine’s Home for Peculiar Children is filled with beautiful, haunting, richly detailed imagery and prose. The photographs and text together build a suspenseful story that alternates between fantasy and reality, past and present. Part coming-of-age story, part time-traveling fantasy, part mystery, part art project, but wonderfully strange and fully unique. Fantasy and thriller fans will enjoy this novel. Fans of David Lynch, Lemony Snickett, and Tim Burton will find this appealing as well.

Tim Burton will be directing the film adaptation, set for release in 2015. The sequel to the book, Hollow City, will be published in January 2014.