When We Were Orphans, by Kazuo Ishiguro 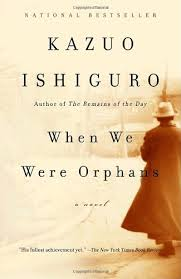 “The past may be set in stone, but our memories of it are not.” Novelist Kazuo Ishiguro is famous for writing stories that contain this truth. The shifting nature of memory certainly sits at the center of his feverish mystery novel “When We Were Orphans.”

Narrated by (the fictional) Christopher Banks, a famous detective in Britain between the two World Wars, as journal entries dated from 1930-1958. His parents mysterious disappearance when he was nine leaves Christopher was orphaned in Shanghai. His father was a businessman within the colonial opium industry, and his mother was a society crusader committed to ending that very industry.

Christopher leads us to believe that his parents’ disappearance resulted from their stand against powerful interests within the opium trade. But his accounts of his childhood reveal both self-doubt and over-confidence about the facts of his past. I began to mistrust his reliability as a narrator as more inconsistencies emerge. His active imagination and proclivity for creating elaborate detective roleplaying games as a child also help to create doubt in the mind of the reader.

After Christopher is sent to England to live under the guardianship of his Aunt, his games turn into the real ambition of becoming a detective. Upon graduating from Cambridge he steadily gains influence in London society, becomes part of a fashionable “set”, and solves many high profile cases. Nevertheless, he is haunted by a desire to uncover what happened to his parents. Part of Christopher remains lost in his childhood remembrances and fantasies, and he determines that he must return to Shanghai—he must scour the city as well as his own memories.

On his arrival, Shanghai is teetering on the edge of chaos and absurdity, and serves as an analog for Christopher’s confused state of mind in the latter half of the book. Ishiguro depicts the city as it was during July 1937, just as the Second Sino-Japanese war is breaking out in the streets. The very space of Christopher’s childhood trauma collapses around him as he aimlessly attempts to sleuth out clues. In vivid passages describing rubble-strewn streets, Christopher is a man wandering inside a constantly shifting labyrinth. And no detective work can be done when no leads can be followed.

“When We Were Orphans” is almost self-revelatory at times—I found myself wondering about the nature of my own past, while reading about Christopher trying to recreate his. Such thoughts are somewhat uncomfortable, but also provoking and satisfying. By the time I reached the end of this unconventional mystery novel, I felt as though I’d travelled far with Christopher and personally.